The Great Spas of Europe

The Great Spa Towns of Europe, which were founded around natural mineral springs, together provide an exceptional testimony to the phenomenon of European balneology which reached its heyday between the 18th century and the early decades of the 20th century.

A characteristic feature of this phenomenon is the combination of indoor and outdoor spa and therapeutic facilities with a wide range of leisure activities, reflected in a specific form of spa towns and their associated architecture. Ensembles of spa buildings including bathhouses, pump rooms, drinking halls and colonnades are complemented by assembly rooms, casinos, theatres and other cultural facilities, all integrated into a carefully maintained therapeutic landscape with mineral springs, parks, gardens, promenades and sports grounds. The surrounding landscape is used for physical activities as part of medical therapy, relaxation and entertainment.

The spa towns were the only places in Europe that culturally rivalled major metropolises and became a source of intellectual, artistic, social and political inspiration, thus contributing to the democratization of European society.

The inscription on the World Heritage List will bring to the Great Spa Towns of Europe not only confirmation of their exceptional values, but also better protection and enhanced cooperation in the fields of heritage conservation, balneology/health, tourism and promotion.

This new transnational serial World Heritage Site is composed of the most significant spas in Europe: Baden bei Wien in Austria, Spa in Belgium, Vichy in France, Baden-Baden, Bad Ems and Bad Kissingen in Germany, Montecatini Terme in Italy, Bath in the UK, and Karlovy Vary, Mariánské Lázně and Františkovy Lázně in the Czech Republic.

"This successful inscription is a triumphant example of the international co-operation which is at the heart of UNESCO'S World Heritage Convention. The Spas themselves are architectural jewels inspired by a new wave of health consciousness. On top of that, practical and strategic expertise from the UK has been fundamental in setting up the international structure necessary to safeguard not one but eleven participating properties in this serial transnational nomination. Bath's leadership in ensuring an ongoing management system at national and local government level as well as bringing together the site managers and tourism officers is an exemplary achievement that should also be celebrated." 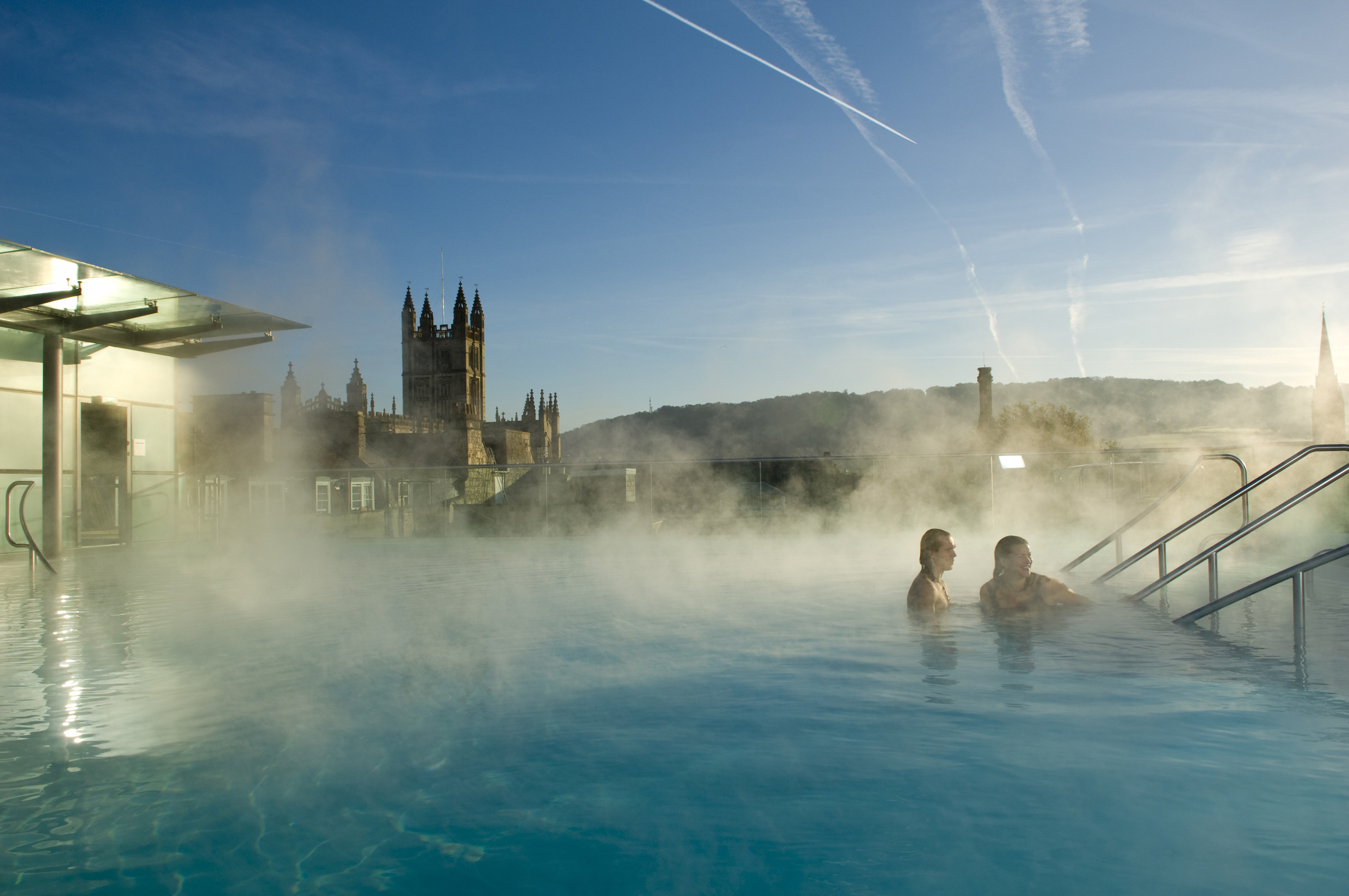 Bath has been a place of healing for over two thousand years. The Roman Baths, drawing upon the three Hot Springs, were followed by the monastic infirmary and medieval hospitals.

Visitor attractions including promenades, pleasure grounds and assembly rooms were built. Bath is the deliberate creation of a utopian city, bringing open-countryside right into the heart of the urban area. The surrounding countryside is also of exceptional quality and provided visitors with exercise through walks and rides.

Today there is a high degree of survival of the authentic historic fabric, a continuing cultural tradition of wellbeing. Bath remains a thriving, beautiful and elegant spa city.

The City of Bath is the UK’s first dually nominated UNESCO World Heritage Site, joining cities like Bruges and Barcelona with the accolade.

Baden bei Wien is one of the most important sulphur spas in Europe. The local thermal springs have been used for healing purposes ever since the ancient Romans, who called this locality Aquae Pannoniae. Baden began to develop as a spa town toward the end of the 15th century.

Following a major fire in 1812, the town and its spa facilities had to be completely rebuilt and a great number of its Classicist townhouses and Biedermeier villas date back to that time. The appearance of the town, as we know it today, is owed to a leading architect of that era, Joseph Kornhäusel.

Although the name Spa comes from the Latin sparsa fontana (gushing fountain) and was already known in the first century A.D., it was in the 18th century that Spa acquired its international reputation to the point where today its name is used as a generic description for fitness centres and baths. The reputation of its water is such that it has been exported since the end of the 16th century, but it was in the 18th century that medical prescriptions for the cure were combined with entertainment, relaxation and excursions.

After Tsar Peter the Great took the cure in 1717, the town became the fashionable rendezvous for European aristocracy, increasingly drawn to it by the elitist entertainment that could be found there. It was at this time that Spa was nicknamed the “cafe of Europe”.

Located in Bourbonnais, on the banks of the river Allier, the waters of Vichy have been in use since Antiquity.

They birthed a thermal town which from the 16th to 18th century that would serve as a model in terms of its urban organisation (roads radiating from the station towards the baths and parks) and its prestigious architecture. Napoleon III furthered its development as a holiday destination with the theatre and casino.

The Thermal springs and a picturesque natural setting associated associated with this site, known to the Romans and placed on the Upper German-Raetian Limes frontier, have held a high profile throughout history.

Bad Ems is characterized by its early heyday and socio-political, historical significance, but in particular and preserved to this day, by its consistent urban closeness, its integrity of classical spa structures and its visually undisturbed embedment into the surrounding landscape. The rise of Bad Ems to a prosperous spa town can be seen in individual, well preserved buildings that date from the end of the 17th century.
.

Bad Kissingen is situated on banks of the Fränkische Saale, a river whose name makes reference to salty water. Documented evidence of salt production at the site dates back to the year 823. Health spas using mineral spring water were first established in the Early Modern period, then reached an initial high point in the Baroque. 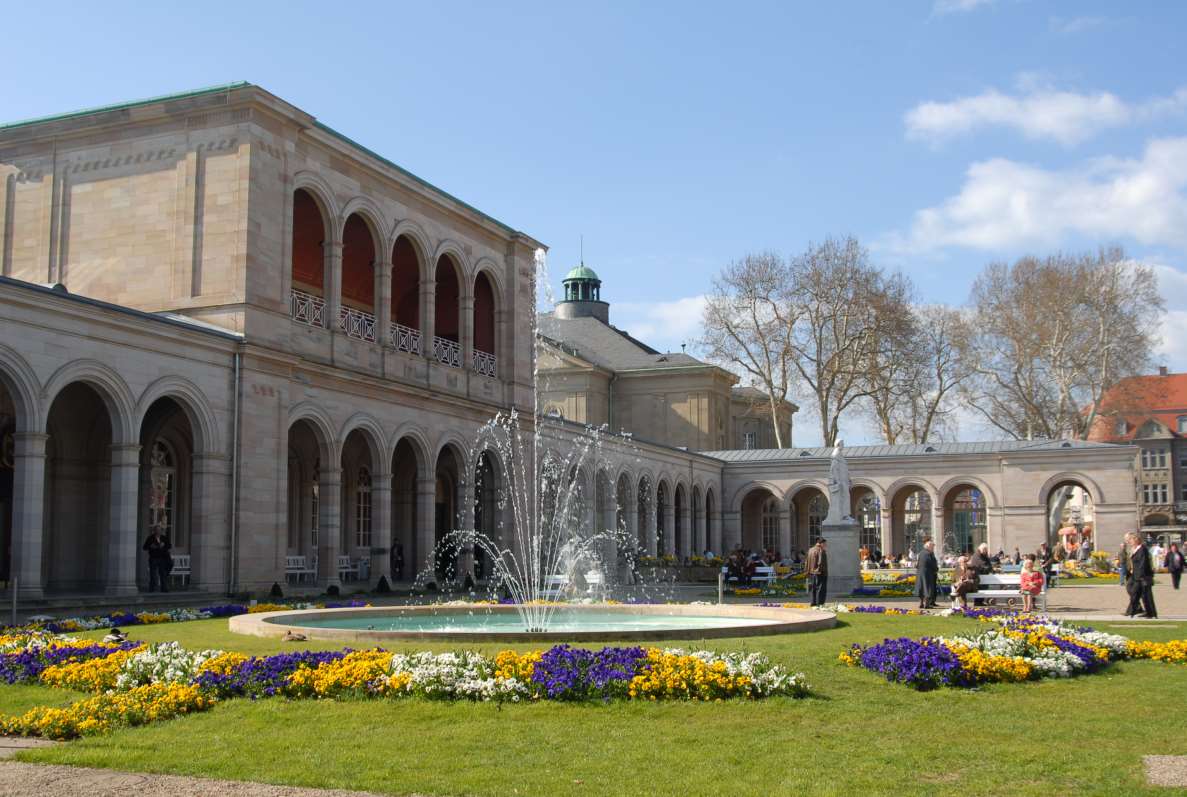 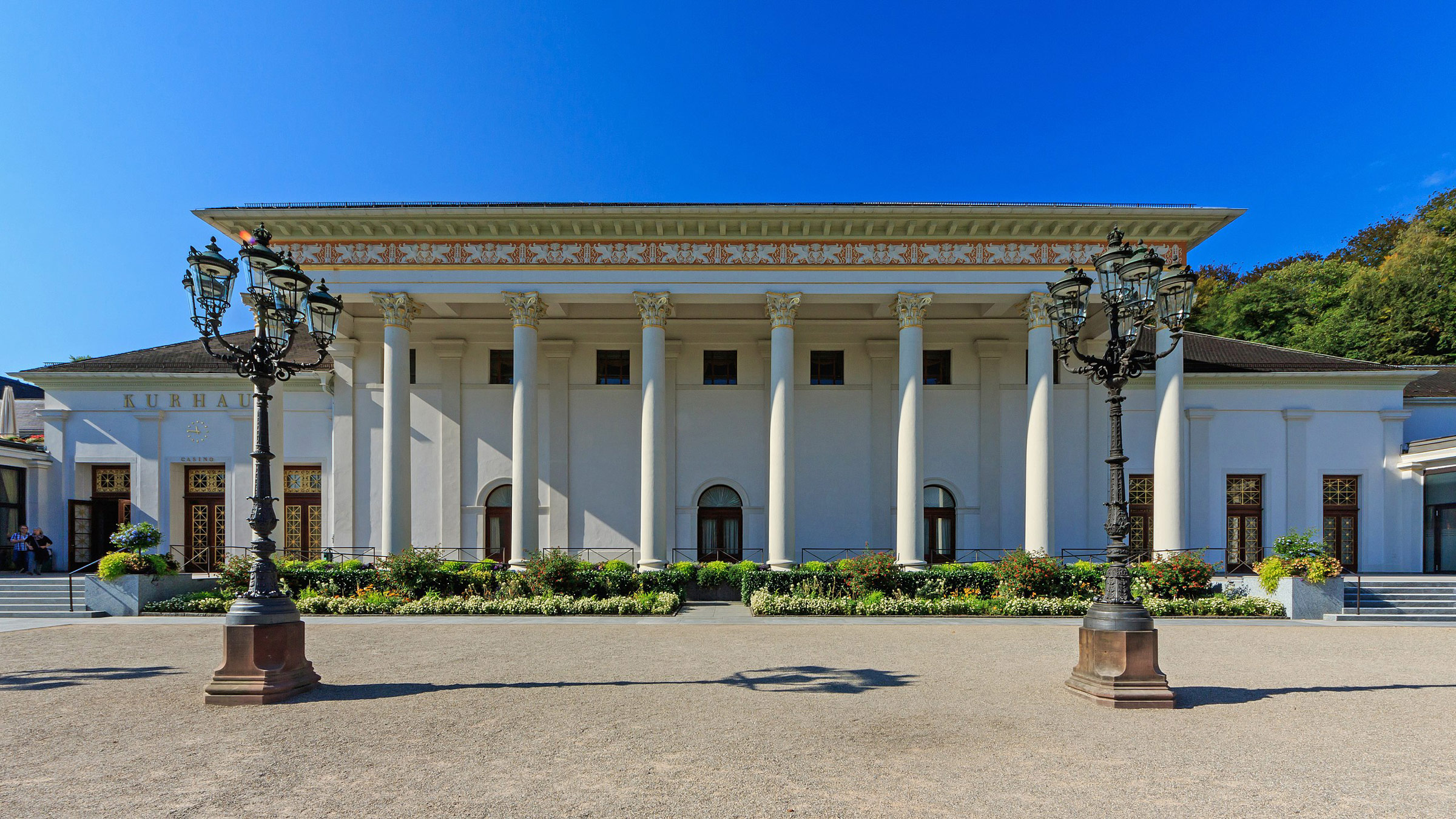 Baden Baden, situated on the western outskirts of the Black Forest, is without any doubt one of the most important spa centre in Europe, whose name is a symbolic bearer of the subject matter of the series. Bathing in Baden-Baden is a tradition dating back to Roman Antiquity. It was founded in 80 AD by the Romans in the place of a former Celtic settlement and named Civitas Aurelia Aquaensis

One of the most famous and sophisticated Italian spas is Montecatini Terme, is located in the Tuscany Region. The springs in this region had been known about since the Middle Ages, and were first owned by the Medicis and then the Habsburgs of Tuscany.

In fact, it was the Archduke Leopold I of Tuscany (Pietro Leopoldo) who began to use the sulphuric springs more frequently during the late 18th century, thereby inciting the general development of the little town beneath the hill, as a new spa town.

Officially, the origin of the spa dates back to 1773. But the spa still has the atmosphere of the beginning of the 20th century, i.e., the era of its greatest boom, when most of the buildings there were built – the baths, casinos, theatres, hotels, and private houses.

Karlovy Vary (Karlsbad) is the biggest spa town in the Czech Republic with a high concentration of thermal springs. The concentration of architectural wealth makes it the largest spa complex in Europe. Karlovy Vary represents a spa town founded in the Middle Ages (and bears the name of Roman Emperor Charles IV), where the spa functions and activities connected with mineral springs dominated during its development.

Mariánské Lázně (Marienbad) ranks among one of the most spacious spa towns in Europe. The town was founded in the period of Classicism at the beginning of the 19th century. Its authors turned the surrounding unpleasant swampy valley into a charming town of parks with Classicist and Empire houses, gloriettes, pavilions and colonnades.

The core of the spa town is a central park with the Spa Colonnade in the wider part of the forested valley. Spa and living buildings encircle this central park and rise to the hills and throughout the valley.

Františkovy Lázně (Franzensbad) of the most significant and well preserved spa towns in Europe The spa town was founded in 1793 in the proximity of a great number of acidulous springs and it was named in honour of Emperor Franz II of Austria.

Local healing springs have been known to exist here since the Middle Ages. Although the spa town was established similarly to Mariánské Lázně in the Classicist period, Františkovy Lázně represents a different concept of urban composition. The spa town centre is founded on a square ground plan with a parallel network of streets and is characterized by a high concentration of Classicist, Empire and Historicism houses.

To be included on the World Heritage List, sites must be of outstanding universal value and meet at least one of UNESCO’s ten selection criteria. 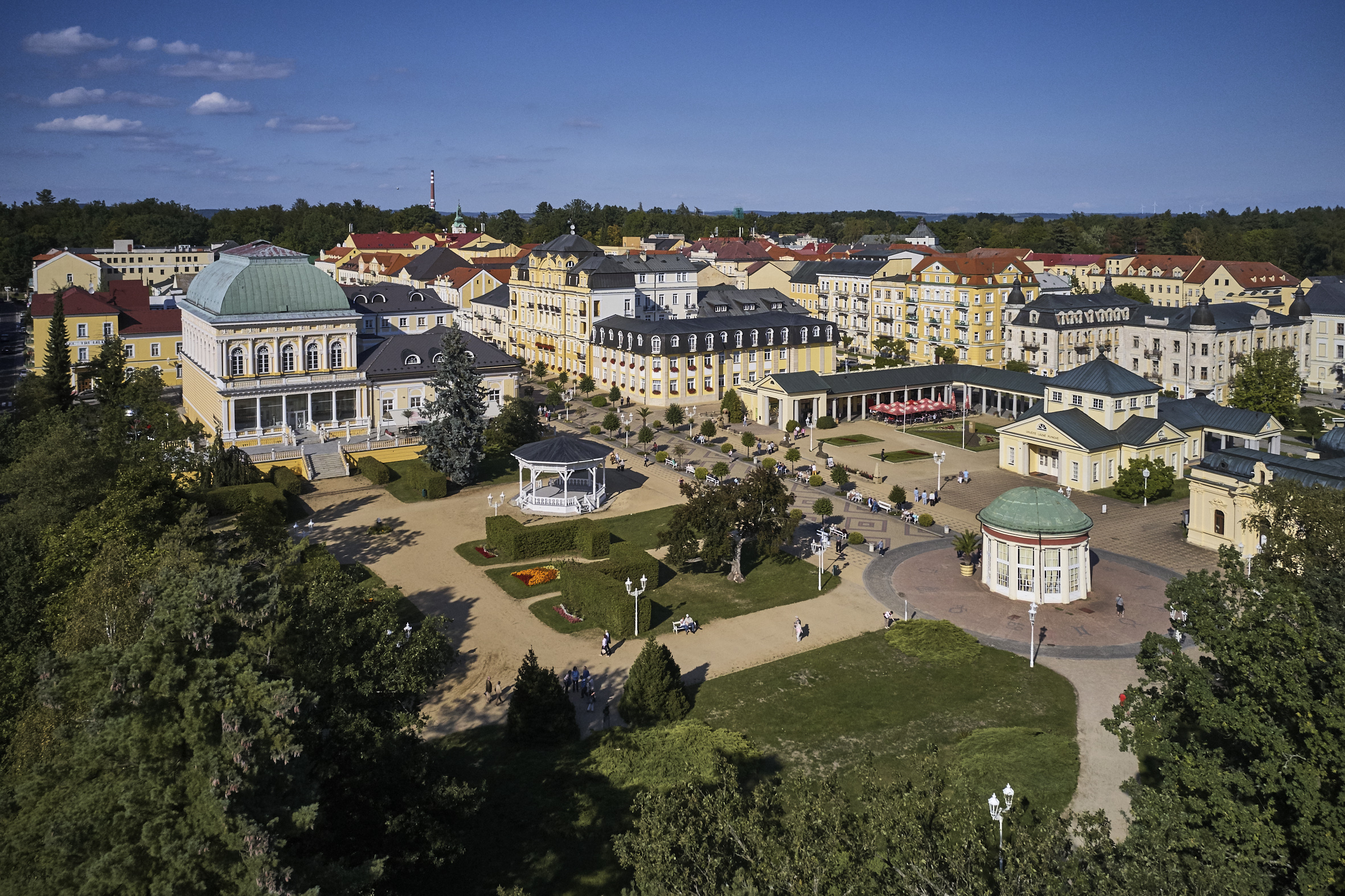 ii) To exhibit an important interchange of human values

Through their pioneering urban planning and architectural prototypes, the property profoundly influenced the physical development of European towns between the 18th and 20th centuries. Similarly, the flow of ideas between the Spa towns contributed to developments in science, medicine and art.

The series of properties bear testimony to a holistic attitude to health that developed around spas. ‘Taking the cure’ comprised not just diagnoses and prescription, but diet and exercise, entertainment, leisure and pleasure. They are a microcosm of Enlightenment values and a culture in its own right. 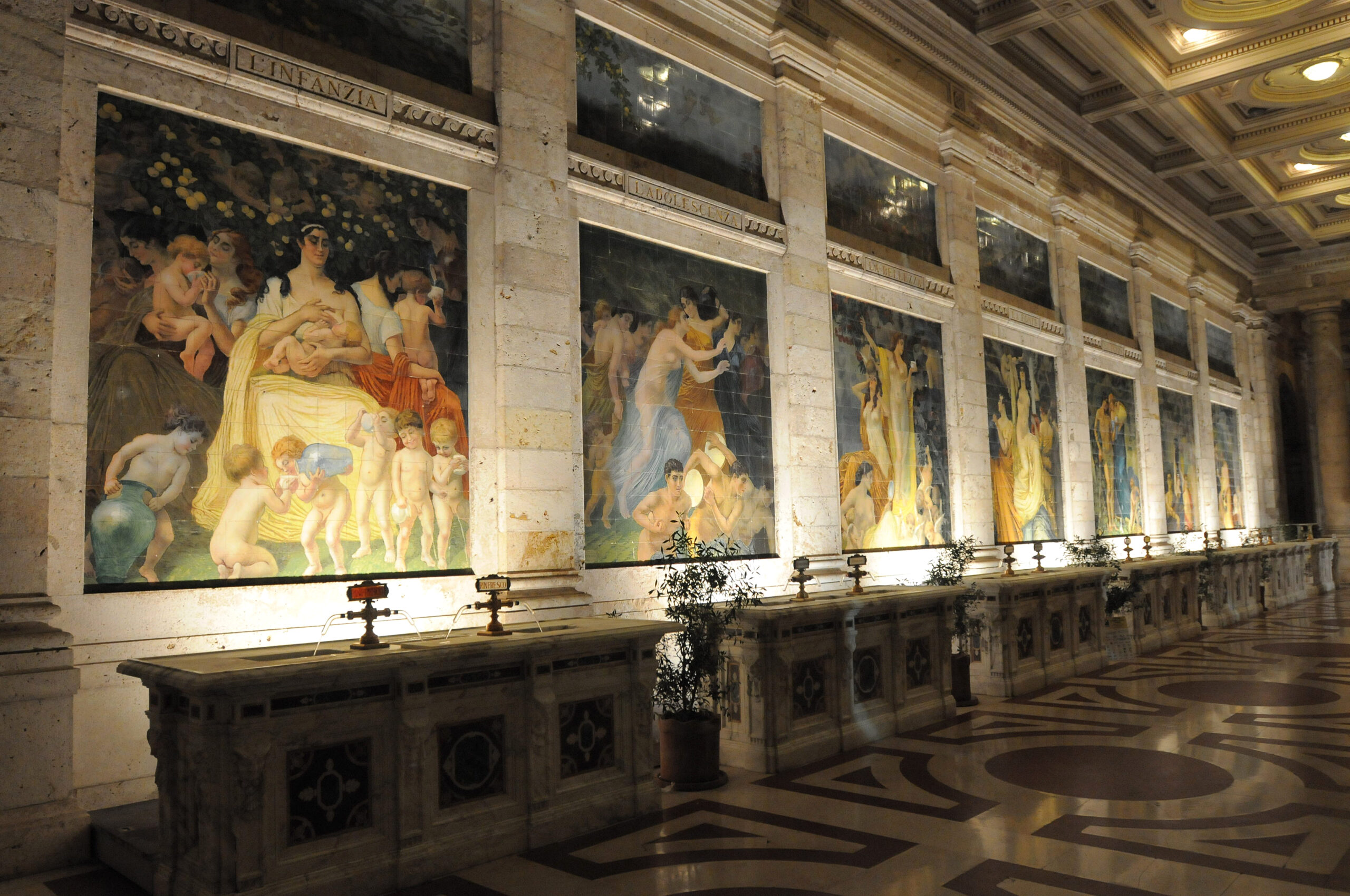 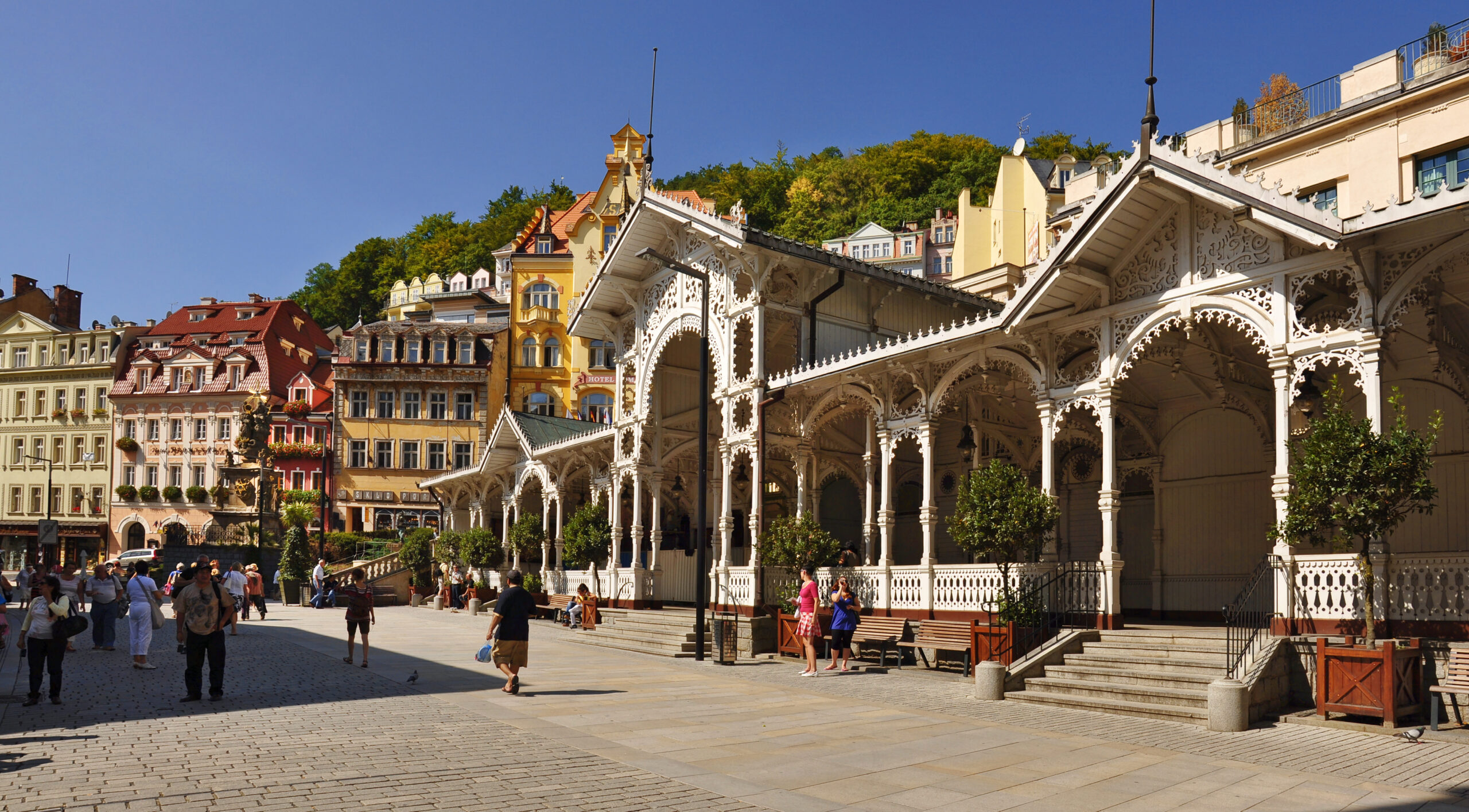 iv) To be an outstanding example of a type of building, architectural or technological ensemble or landscape

The property is an outstanding example of a new urban typology – the ‘spa town’ – a configuration of high-quality architecture, town planning and landscape design, arranged according to the physical location of natural mineral springs, and inextricably entwined with the cultural evolution of ‘taking the cure’ and modern tourism.

vi) To be directly or tangibly associated with events or living traditions, with ideas, or with beliefs, with artistic and literary works of outstanding universal significance

As transnational vectors of social, political and artistic ideas, the property reflects the religious and social freedom of the Enlightenment, helping to shape Europe. Spa towns were sources of artistic patrons and inspiration for works of universal significance. 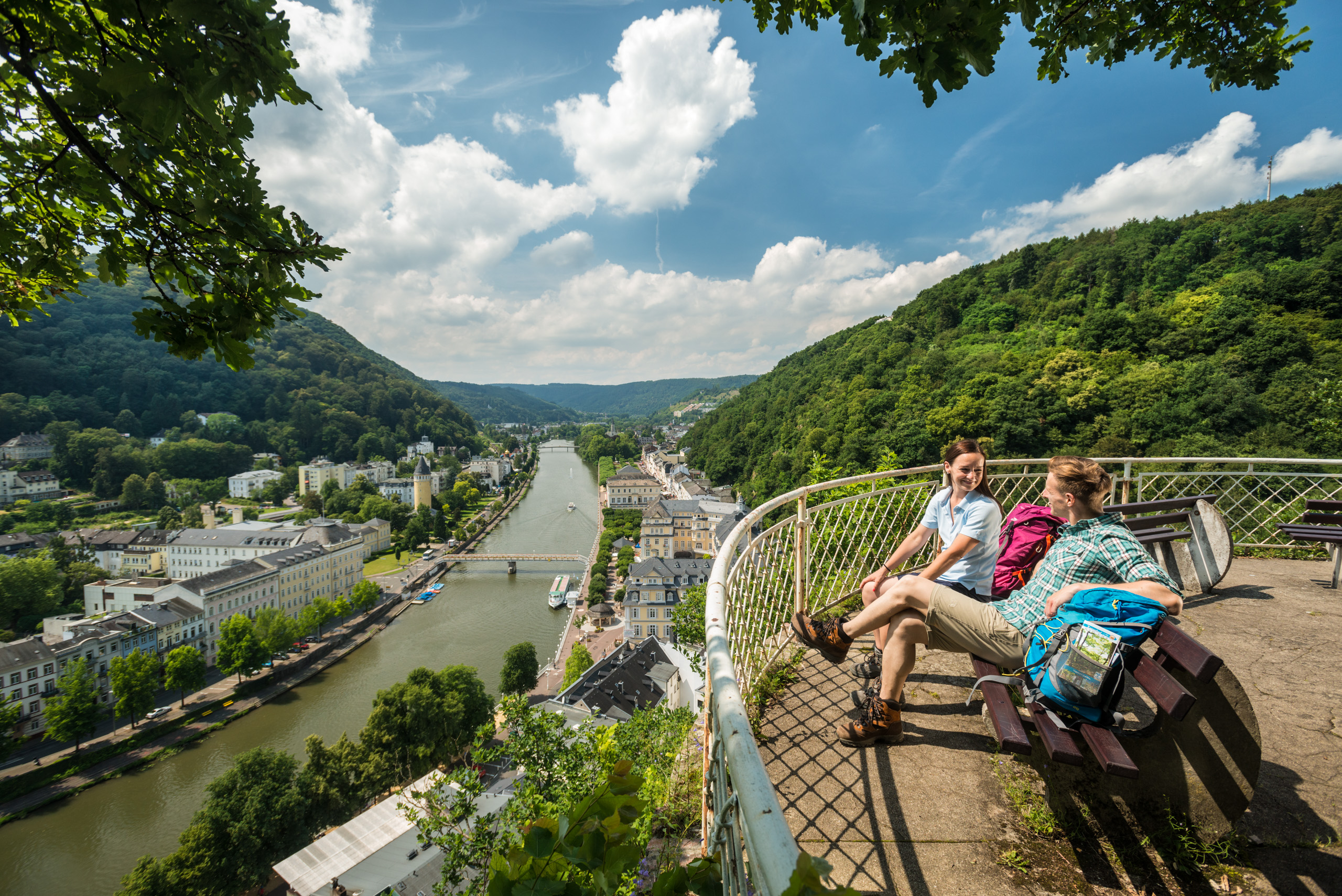